Do you feel your face is out of balance, that your nose seems too big for your face, or that you lack a defined neck line.  It could be that you have a weak chin.  A week chin can make your nose look too large and your lower face small in relation to your upper face.  In childhood, orthodontics to move teeth around is often done to correct map-aligned teeth due to a small lower jaw (or mandible.)

Chin augmentation involves enlarging a weak chin in order to better balance the facial profile and enhance facial aesthetics. A weak or under-projecting chin can give an unattractive appearance. Due to imbalance of the upper to lower face, a weak or under-projecting chin can give the appearance that the nose is too big for the face and often people seek reduction in nose size (rhinoplasty) when really the chin is a major contributing factor to their concerns. 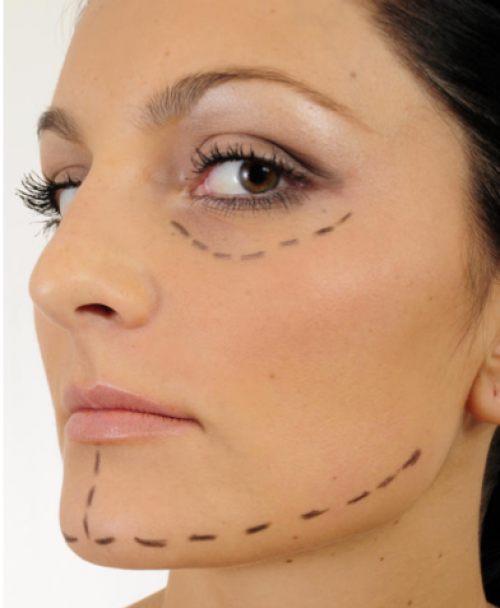 BEFORE AND AFTER PHOTOS

A weakness of the chin may cause concern. Weak chins are usually due to relative underdevelopment of the lower jaw. This is often associated with mal-occlusion or non alignment of the lower and upper teeth. The lower teeth don’t come forward enough to fit with the upper teeth in the normal way. When this problem is corrected with jaw surgery by moving the lower jaw forward, the chin is automatically brought forward as well and the weak chin issue resolved. Often, however, at an early age, orthodontics or braces is used to tilt the bottom teeth forward and the weak chin problem remains.

We offer digital imaging where you photos are edited to demonstrate to you your expected result following chin augmentation.

This is the simplest way of doing chin augmentation. It is suitable for achieving a more gentle or less dramatic augmentation. The implant is inserted onto the surface of the jaw bone lower rim either via the mouth or from an incision under the chin. The best material to use is rigid porous polyurethane (plastic) which is fixed to the bone with screws so it won’t move.

The more effective way to achieve a natural chin augmentation is to move the bone of the rim of the lower jaw forward. A cut is made in the jaw bone via an incision in the lower gum. The chin point slides forward and is fixed with screws. This has the advantage not only of a more dramatic augmentation but also allows lengthening in height of the chin. Because the patients own bone is used to augment rather than plastic, it is a stronger and more stable augmentation. It also avoids possible complications of a plastic implant.

The operation involves a general anaesthetic and a one night hospital stay. Discomfort from the procedure is usually surprisingly little. Return to work can usually be is two weeks or so.